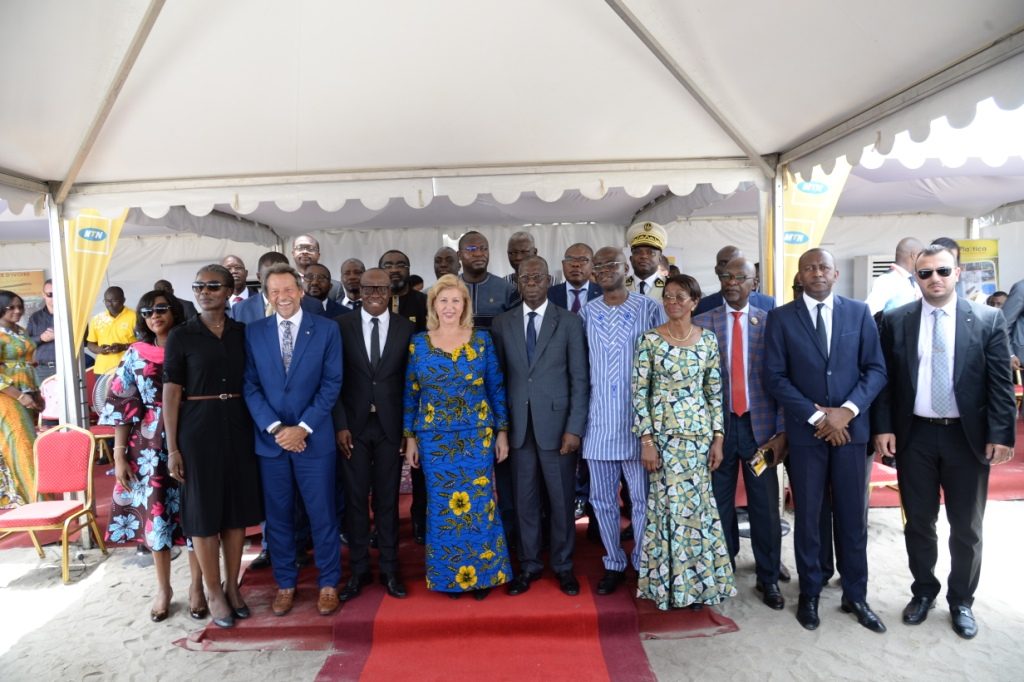 First Lady Dominique Ouattara officially launched on Tuesday, April 23, 2019, the 12th edition of the Festival of Urban Music of Anoumabo. The 12th edition of FEMUA will take place from Tuesday 23 to Sunday 28 April in Abidjan and Gagnoa on the theme: “Gender and development”. The opening ceremony took place in Anoumabo and witnessed the presence of several officials including Mr. Abdoul Karim Sango, Minister of Culture, Arts and Tourism of Burkina Faso; Mr. Kouakou Maurice Bandama, Minister of Culture and Francophonie; Ms. Bakayoko Ly-Ramata, Minister of Women, Family and Children; Mr. Jobst Von Kirchmann, EU Ambassador.

Over the years, the festival has been able to mix culture with social and humanitarian action. For this 12th edition, Mrs. Dominique Ouattara, godmother of the event responded favourably to a request made by Magic System Group. She proceeded to the renovation and equipment of the Women Institute for Training and Education (IFEF) and the Marcory Anoumabo health center. The value of the renovation work is estimated at 40 million F CFA, 20 million CFA francs for each building. In addition to that, the First Lady offered 10 million CFA to the community and to the musical bands participating in the event.

For this event the First Lady has given presents equalling 50 million CFA. The Magic System Foundation, walking in the footsteps of Mrs. Dominique Ouattara, has built a school in Gagnoa and an institute for orphans in Bingerville.

Referring to the theme of the festival, the First Lady stressed the importance of gender development. She called on decision-makers for more implication in the matter. “Today, gender development is a challenge for all decision-makers in the world. (…) the involvement of all will enable us to move the lines. We must therefore act and continue to encourage our sisters to set up their own business in order to gain autonomy, “said Dominique Ouattara. The wife of the head of state also took the opportunity to compliment magic system for the progress they have made over the years.

“(…) FEMUA is an international music festival, bringing together renowned singers. I am very proud to see how determined the organizers are. Every year they come out with new ideas to offer exceptional moments of happiness to the public, “said Dominique Ouattara. For Dominique Ouattara, in addition to its cultural component, the FEMUA is also a humanitarian and social commitment.

“In addition to being a great musical event, FEMUA is also a strong human commitment, as well as an exceptional solidarity movement. Indeed, since 2008, the Magic System Foundation has carried out numerous social actions in Abidjan and in the countryside, through the construction of primary and nursery schools. All these social actions significantly contribute to the development of vulnerable populations, and to the schooling of our dear children, “she said.

For his part,  Mr. Maurice Kouakou Bandama, Minister of Culture and Francophonie, mentioned the link between FEMUA’s objectives with President’s will, which is to establish social inclusion and young people at the heart of his development policies. He congratulated the First Lady for her social and humanitarian commitment.

Mr. Jobst Von Kirchmann, European Union Ambassador emphasized that it is impossible to achieve development without gender equity. In this regard, he argued that 40 billion CFA francs were allocated by the EU to support the enrolment of girls in school. He also revealed that in the coming days the European Union and the Magic System Foundation will organize a caravan called: “EU Magic Tour” to get more girls into school.

Traoré Salif a.k.a Asalfo, FEMUA General Commissioner revealed that the festival brings together 16 singers from 8 countries including 8 women who will perform on the podium.