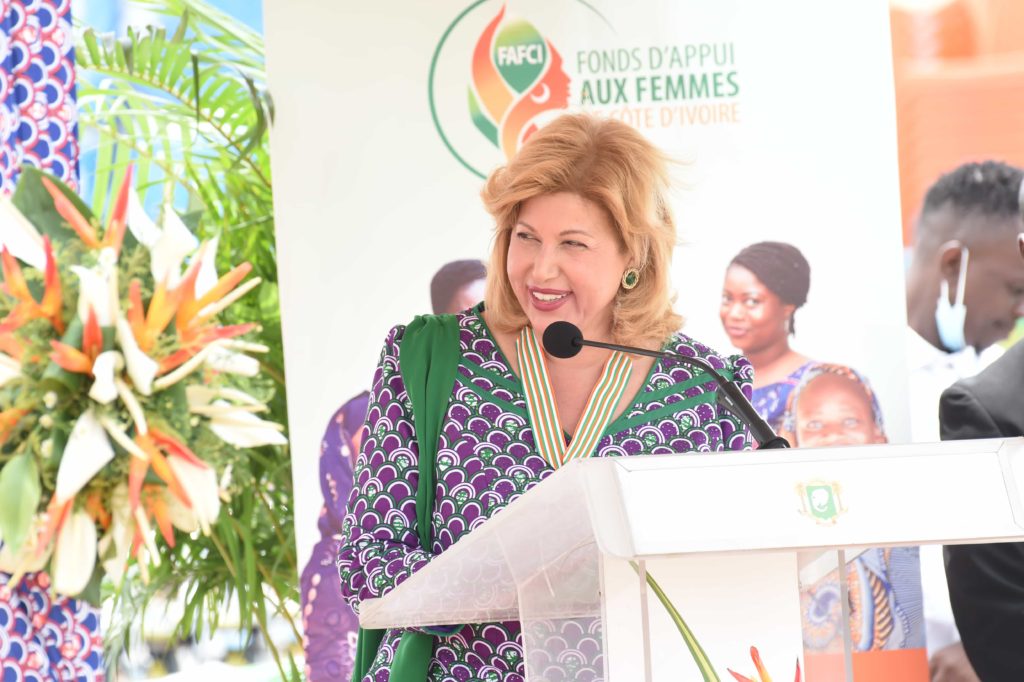 The 45th edition of the International Women’s Rights Day (IWD) was celebrated fervently on Tuesday, March 8, 2022, at the Agora place in the commune of Koumassi. More than 5,000 women from all components of Ivorian society stormed the place to celebrate this day marking their struggles for women’s rights and gender equity.

Placed under the patronage of Mrs. Dominique Ouattara, First Lady of Côte d’Ivoire, the ceremony witnessed the participation of female members of the Government and several other officials. The theme of IWD 2022 is: “creating equal opportunities to build a sustainable future for all”.

This year’s edition had a special character. Indeed, seven (7) personalities including First Lady Dominique Ouattara received the recognition of the State of Côte d’Ivoire for their commitment to the promotion of gender and development. Indeed, the First Lady Dominique Ouattara for her actions in favor of gender development has been made Commander of the Order of Merit. The ten (6) other personalities were elevated to the rank of officers and knights of the Order of Merit.

First Lady Dominique Ouattara took this opportunity to make important in kind and cash donations worth 130 million CFA francs to the women of Koumassi. The donations are made up of hairdressing and sewing materials and equipment, to strengthen women’s capacities and skills. In addition, the First Lady gave ten (10) million F CFA to the people of koumassi. The wife of the Head of State offered a total of 140 million CFA francs in various kinds of gifts to the women and the people.   An additional amount of 300 million F CFA was also granted to women as part of the FAFCI fund. The initial amount of one billion CFA francs, has now reached 1,300,000,000 CFA francs. This additional amount represents a real breath of fresh air for the women of this commune and will increase women’s access to the loan.

Taking the floor, the First Lady recalled the importance to celebrate the International Women’s Rights Day. According to her, it gives the government the opportunity for taking stock of the progress made and the challenges to be met, in order to look at  new strategies. “(…) As you know, March 8 has been declared International Women’s Rights Day by the United Nations since 1977. This day focuses all attention on women’s rights. Governments then present their efforts and the challenges they face” said Ms. Dominique Ouattara. She believes women play a key role in the development of a country. “(…) women’s rights is an issue of very great concern to all of us, because women occupy a prominent place in all realms and all sectors of activity. Women also play an important  role in the stability of the family and the welfare of its members.” she concluded.

Mrs. Nassénéba Touré, Minister of Women, Family and Children, welcomed the progress made by the government in terms of gender promotion. She recalled that President Alassane Ouattara has made this a priority when he took office in 2011. However, despite all the efforts, much remains to be done to achieve true gender equity. She therefore urged women for more implication to meet the remaining challenges despite real progress observed in Ivorian society. In addition, Mrs. Nassénéba Touré announced that the Children of Africa Foundation would soon build a shelter for abused women.

Cissé Ibrahima Bacongo, Mayor of the commune of Koumassi, thanked the First Lady for her commitment to the well-being of women. Mrs. Traoré Salimata, spokesperson for the women of Koumassi, also expressed her thannks to the First Lady.

The ceremony ended with  gifts offered to the Presidential couple and a parade.