Accueil » Activités » 8th edition of the festival of lights

8th edition of the festival of lights 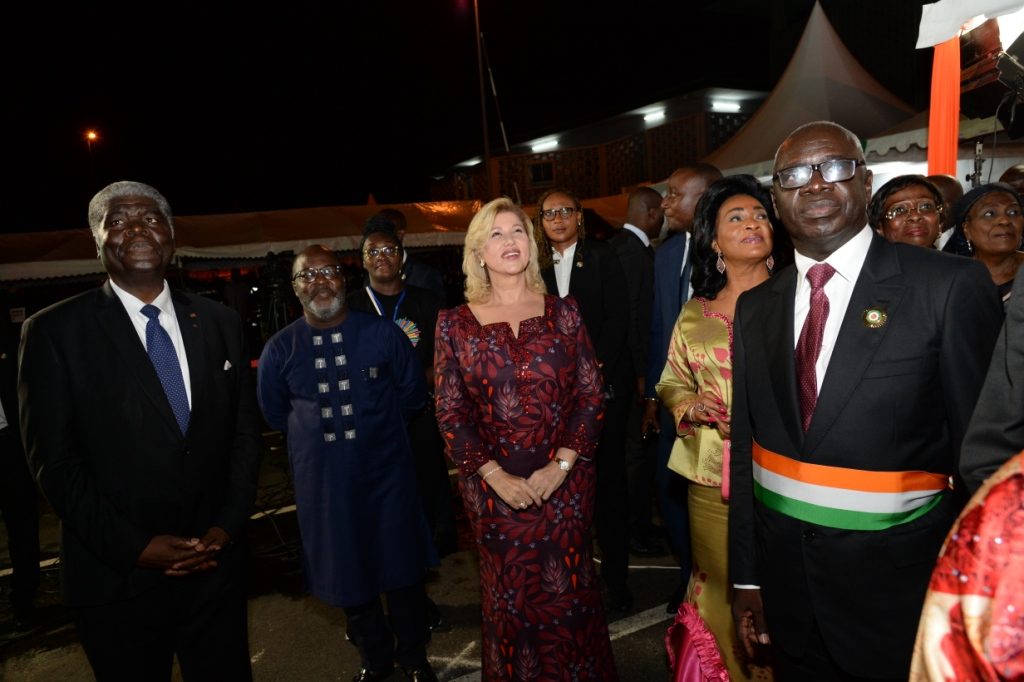 The First Lady, Dominique Ouattara has launched the 8th edition of the festival of lights of the city of Abidjan, on Friday, December 21, 2018 on the esplanade of the Palace of Justice in Plateau. The launching ceremony of the 2018 edition was placed under the reconciliation and recorded the presence of several Government officials including Mr. Eugène Aka Aouélé, Minister of Health and Public Hygiene , Mr Sidiki Diakité, Minister of the Interior and Security, Mrs Kaba Nialé, Minister of Budget, Mrs Bakayoko Ly Ramata, Minister for Women, Family and Children and many other personalities and Ambassadors.

At 19 hours the First Lady, godmother of the event has energized the tree 30 meters high which sits between the Law Courts of Abidjan and Saint Paul Cathedral.

Giving thus through this solemn act the starting point on the one hand of the illumination of the luminaries which embellish the administrative commune of the Plateau and on the other hand, the festivities which mark the end of the year. Once again, the District of Abidjan will return in the new year adorned with its finest assets to the delight of Abidjan.

Mrs. Dominique Ouattara, godmother of the event was delighted with the choice of the theme of this edition. Indeed, for the wife of the Head of State, the colors of lights that shine brightly during these holidays will be a moment of sharing beyond any distinction. “This year, the theme chosen for the illuminations of the city of Abidjan is:” Reconciliation “. Indeed, the magnificent lights that will shine during the holidays, will be an opportunity for Ivorians to meet and share wonderful moments regardless of origin, age, religion or political affiliation. As a rallying factor and social cohesion, Abidjan Pearl of Lights really symbolizes the spirit of Christmas and the transition to the new year, with all that implies renewal and good resolutions, “said Dominique Ouattara. For Mrs. Dominique Ouattara, the illumination of the city of Abidjan is now a tradition dear to Ivorians who for eight years have been waiting for this moment. “The Festival of Lights is a flagship attraction in the hearts and minds of all Abidjan people, and it arouses the interest of young and old alike. And tonight, my joy is great to be able to live this moment of fraternity with each one of you “, rejoiced Mrs. Dominique Ouattara. She concluded by expressing the wish that 2019 be a year of peace.

The Minister Robert Beugré Mambé, Governor of the District of Abidjan explained the symbolism of the theme of this edition and the big tree. For the latter, the tree is the symbol of God by its point and the men by its base. So, for him, God being the perpetual quest of men, so they aspire in him. Also, by the multiplicity of its rays, the tree symbolizes the diversity of the population which despite this plurality is obliged to live together. In short, the tree for the Minister Robert Beugré Mambé symbolizes the living together advocated by the head of state, President Alassane Ouattara.

Dao Mamadou, General Administrator of Apotheoz, the initiator of the event explained the different areas of Abidjan which will be illuminated this year. According to the latter, in addition to the commune of the Plateau, three (03) points will be the attraction of the Abidjan. This is the boulevard de France for the commune of Cocody, the street 12 for the municipality of Treichville and the roundabout of the municipality of Abobo. According to Mr. Dao Mamadou, it took more than 2,800 hours of work to make this 8th edition possible. Addressing the main attraction of this festival of light, it has existed that the fir reaches a height of 30 meters. It is decorated with 200 balls of light, 600 decorative pieces, 130,000 light points and 13,000 meters of wire. It is all these technical prowess that made this 8th edition of the Festival of Lights possible.

Mr. Jacques Yapi, interim Mayor of the Plateau commune, meanwhile, welcomed Mrs. Dominique Ouattara. He welcomed the fact that his town is the setting for this holiday every year.

As every year, the illumination of the city of Abidjan gives Ivorians the opportunity to meet as a family around the lights. This edition will not escape this tradition.