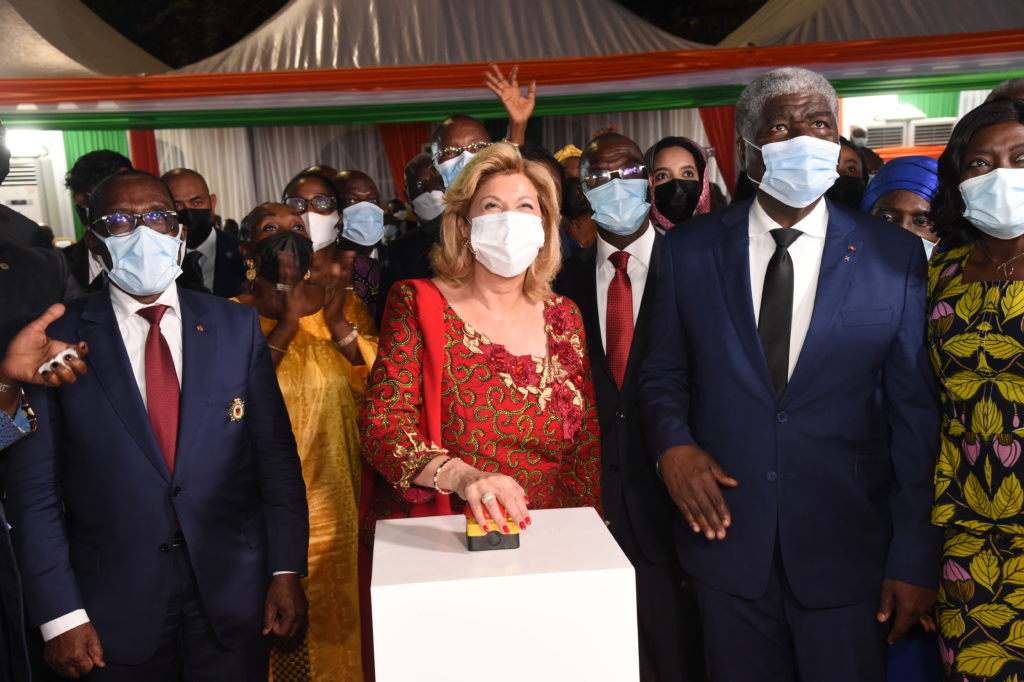 First Lady Dominique Ouattara proceeded to the launch of the 2021 edition of the Abidjan Lights Festival, on Thursday, December 23, 2021, at the urban park ”Dominique Ouattara” at the Riviera 3, near the traffic circle Mel Eg Théodore..

The ceremony witnessed the participation of Mr. Eugène Aka Aouélé, President of the Economic, Social, Environmental and Cultural Council, Ms. Raymonde Goudou Coffie, Minister-Governor of the Autonomous District of Lakes, Mr. Robert Beugré Mambé, Minister-Governor of the Autonomous District of Abidjan, Mr. Bruno Nabagné Koné, Minister of Construction, Housing and Urbanism and many other officials.

This ceremony which gives the top start of the celebration of the coming year in Abidjan has the theme: “Côte d’Ivoire, solidarity and unity”.

This theme was translated into action by Mrs. Dominique Ouattara, sponsor of the event, with a donation of 30 million CFA francs to socially vulnerable families of Cocody. The donations will enable these families to celebrate the new year in good conditions. “It is in this spirit of solidarity that food is offered today to hundreds of vulnerable families to enable them to spend a pleasant holiday season,” said Ms. Dominique Ouattara. In addition, the First Lady Dominique Ouattara called on Ivorians to preserve the values of solidarity and unity. For her, This is the only way our country can achieve a truly harmonious development. “If we are united, we can make our country a better place and provide a harmonious development to our fellow citizens. this year ‘s theme which focuses on “unity and solidary” is quite appropriate and encourages us to keep in mind these cardinal values important for our country”, explained Mrs. Dominique Ouattara. Mrs. Dominique Ouattara also expressed hope for a more united country that transcends all barriers of division.  Before concluding, the wife of the Head of State shared her vision of Côte d’Ivoire to the personalities present, as well as to the people who made the trip. “Before closing my speech, and at the dawn of this new year, I would like to share with you my vision for our beloved Côte d’Ivoire. I dream of a country where solidarity breaks all barriers for the happiness of all its people. A country where unity gives us the strength to go further and the courage to take up ever greater challenges,” she said.

Robert Beugré Mambé, Minister-Governor of the Autonomous District of Abidjan and the person who initiated the Abidjan lights festival, took the opportunity to thank the First Lady for her support since the first edition of Abidjan, City of Light. Taking advantage of the event, Mr. Robert Beugré Mambé gave the meaning of this celebration. According to the Minister-Governor, light is both a spiritual element that is related to the celestial, brings joy and invites to travel. Everything, according to him, which contributes to peace and cohesion. The illuminations of the city of Abidjan are now an annual appointment that many Ivorians are waiting impatiently.

Mrs. Nelly Ouassenan, representing the Mayor of Cocody, thanked the First Lady for her charitable actions for the people.