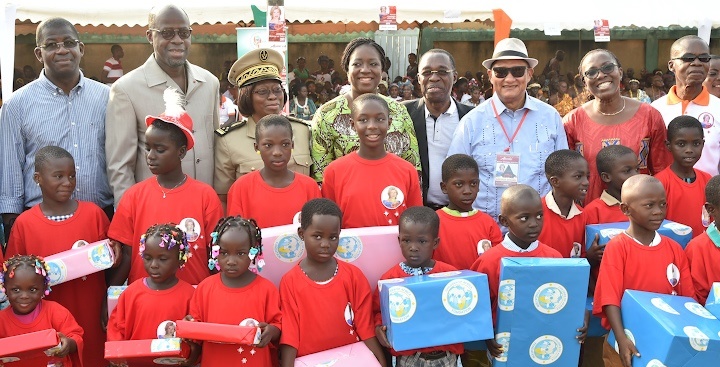 The people of Assinie-Mafia will spend an excellent holiday season 2017. Indeed, the First Lady, Dominique Ouattara, always concerned with the well-being of his fellow citizens has made significant donations to the people of this locality. Thus, after 2012, Mrs. Nadine Sangaré, Director of humanitarian actions and representative of Mrs. Dominique Ouattara, went to  Assinie-Mafia on Sunday, December 24, 2017 in. In fact, on behalf of Mrs. Dominique Ouattara, she offered donations worth 23,500,000 CFA francs to the people of Assinie. These donations include equipment for women's groups and co-operatives, equipment for restaurants owners and hairdressers, food and 600 children’s toys. In addition, Mrs. Dominique Ouattara has granted an additional 50 million CFA francs to the Women's Support Fund (FAFCI). In this context, 100 women received checks from the FAFCI to enable them to undertake an income-generating activity. The ceremony, witnessed the presence of the Minister of Water and Forests, Alain Richard Donwahi, the Deputy Mayor of Adiaké, Hien Sié, the President of the Regional Council from the region of Sud-Comoé, Aka Aouelé. According to Mrs. Nadine Sangaré, representing Mrs. Dominique Ouattara, the First Lady has decided to celebrate this year Christmas with the people of Assinie.

Aka Aouelé, President of the Regional Council of Sud-Comoé expressed his thanks to the wife of the Head of State for her generosity. This action will help relieve local people. In addition, according to him, the FAFCI will empower women in a traditional society that does not always promote their development. Pierre Magne, President of the NGO Adam has echoed the same. Ms. Kouassi Benedicte, spokesperson for women of Assinie has expressed the thanks of the local women. After this ceremony, Mrs. Dominique Ouattara attended the Christmas service at the catholic church.