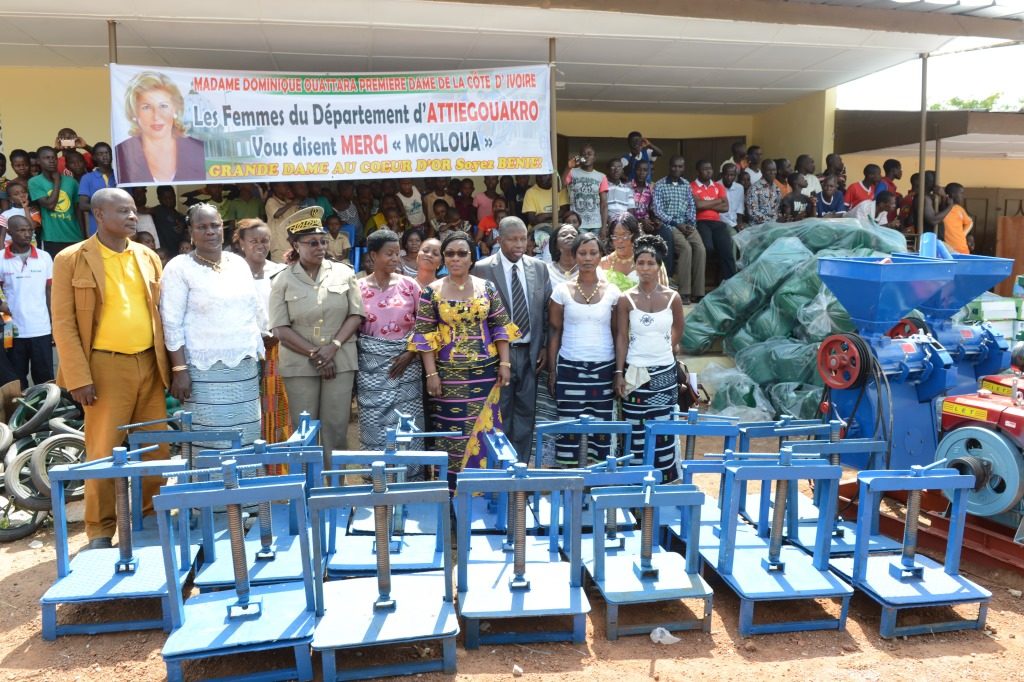 It was Christmas before time. The populations of Attiégouakro Department have celebrated with fervor, on Friday, December 6th, 2013, the generosity of the First Lady, Mrs. Dominique Ouattara. From the sub- prefectures of Attiégouakro and Lolabo, the populations massively stormed the enclosure of the school EPP Château and EPP Dr Kalet to communicate with the members of the Office of the wife of the Head of State. Like in the previous locations, the emissaries of Mrs. Dominique Ouattara have spread joy and hope in the heart of the populations of this Department located fifteen kilometers from Yamoussoukro District. On behalf of the First Lady, Mrs. Patricia Yao Sylvie representative of Dominique Ouattara offered food and large amounts of equipment and materials worth 60 million CFA francs. Thus, the representative of the Ivorian Mother Teresa offered agricultural machinery to women's cooperatives and groups. In the social field, she offered helmets, hairdressing equipment, lots of sewing equipment, gas stoves, freezers and sewing machines to Attiegouakro women centers. High schools and junior schools of this locality have not been forgottenby this heartfelt impulse of the First Lady. They received furniture, computers, printers and chairs. As for the kindergartens, they received lots of toys and mats for the joy of toddlers. The emissaries of the Lady with a big heart have also provided important food for the populations. The health centers of Attiégouakro received inpatient beds; mattresses; delivery tables, examination tables, medical refrigerators, etc. ….

As a bonus, Mrs. Dominique Ouattara has offered the populations of the department of Attiégouakro, a brand new ambulance.