Accueil » Activités » Children of Africa » Back to school 2019-2020 : The Children Of Africa Foundation to offer 12,000 school kits to schoolchildren in Côte d’Ivoire

Back to school 2019-2020 : The Children Of Africa Foundation to offer 12,000 school kits to schoolchildren in Côte d’Ivoire 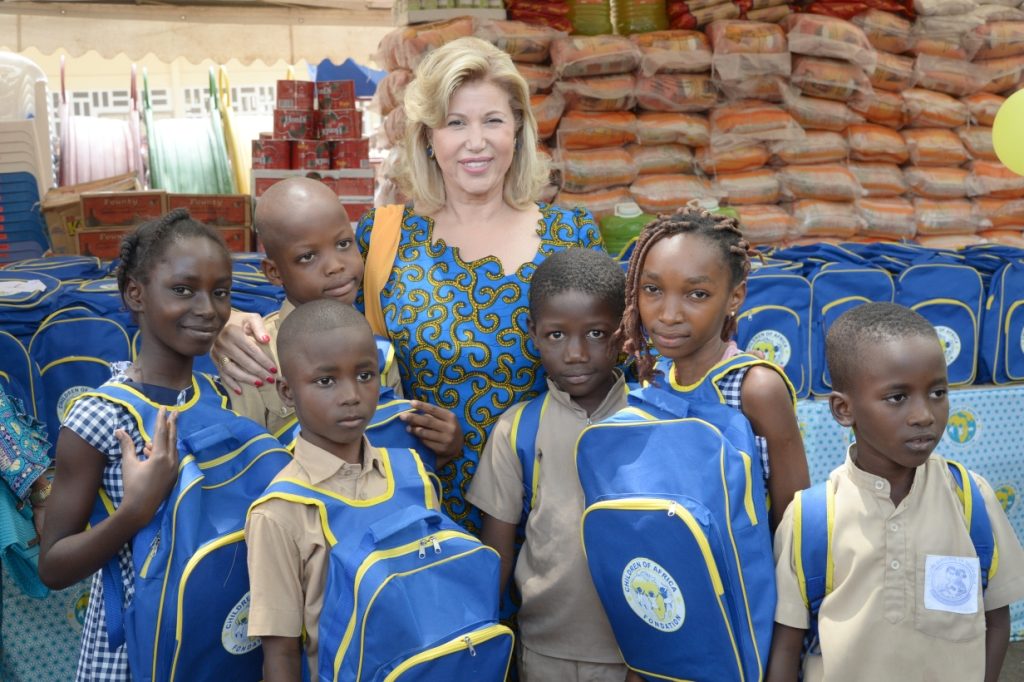 Mrs Dominique Ouattara, President of Children Of Africa, officially launched on Thursday, October 10, 2019, a campaign to distribute school kits to schoolchildren in Côte d’Ivoire for the 2019-2020 school year.

The launching ceremony took place at the Treichville Regional School Group and witnessed the participation of Mrs Clarisse Duncan, wife of the Vice-President of the Republic, Mrs Patricia Ahoussou, wife of the President of the Senate, Mrs Kandia Camara, Minister of National Education and Professional Training and many other personalities.

12,000 school kits will be distributed free of charge to schoolchildren across the country. These kits consist of bags, books and a variety of school supplies.   As part of the launch ceremony, 5,000 school kits were distributed in the Abidjan District, including 2,000 to the Groupe Scolaire Régional of Treichville.  In addition, Mrs. Dominique Ouattara offered donations in kind and in cash to the Groupe Scolaire Régional de Treichville and to the local community, worth more than 37 million CFA francs. The total cost for the school kits is estimated at 165 million CFA francs.

For Mrs Dominique Ouattara, President of Children Of Africa, this ceremony is very important because it gives all children the opportunity to have access to quality education.  “This initiative is very important  to us because it is essential for all children to have access to quality education, in order to achieve equity and sustainable economic development,” said Ms Dominique Ouattara.   According to the President of Children Of Africa, this distribution ceremony is to give the same education opportunities to the poorest children. “This initiative is to encourage and facilitate children’s enrolment to school especially for the most disadvantaged, in order to give everyone equal success opportunities” she said.

Taking advantage of this opportunity, the wife of the Head of State has praised government’s efforts for making school compulsory for all children aged 6 to 16.  She also pointed out that children’s education is one of the three pillars on which the Children Of Africa Foundation’s work rests.  And it is precisely because a good education guarantees a better future for children that the Children Of Africa Foundation has decided to support parents in their efforts to enrol their children to school. “(…) to date, the Foundation has distributed 120,000 school kits since its inception,” said Ms Dominique Ouattara.

Mrs Kandia Kamissoko Camara, Minister of National Education, Technical Education and Vocational Training, welcomed this initiative, which represents a real breath of fresh air not only for parents but also for the Government.   She revealed that efforts are still needed to ensure access to education for all children despite progress made by the Government. She recalled that last September, her Ministry launched the distribution of more than 4 million school kits and 250,000 table benches for all primary schools in the country. In view of the increase in the number of children in school, the Minister has welcomed the action initiated by the Children Of Africa Foundation.

Adopeau Athanase, member of the Coges and Miss Sy Habibatou Victoire, a student at the Groupe Scolaire Régional, have in turn praised Mrs Dominique Ouattara’s commitment to help the most disadvantaged. On behalf of the parents and students, they thanked her for the donations. It should be noted that the children also offered a magnificent painting to their generous donor.