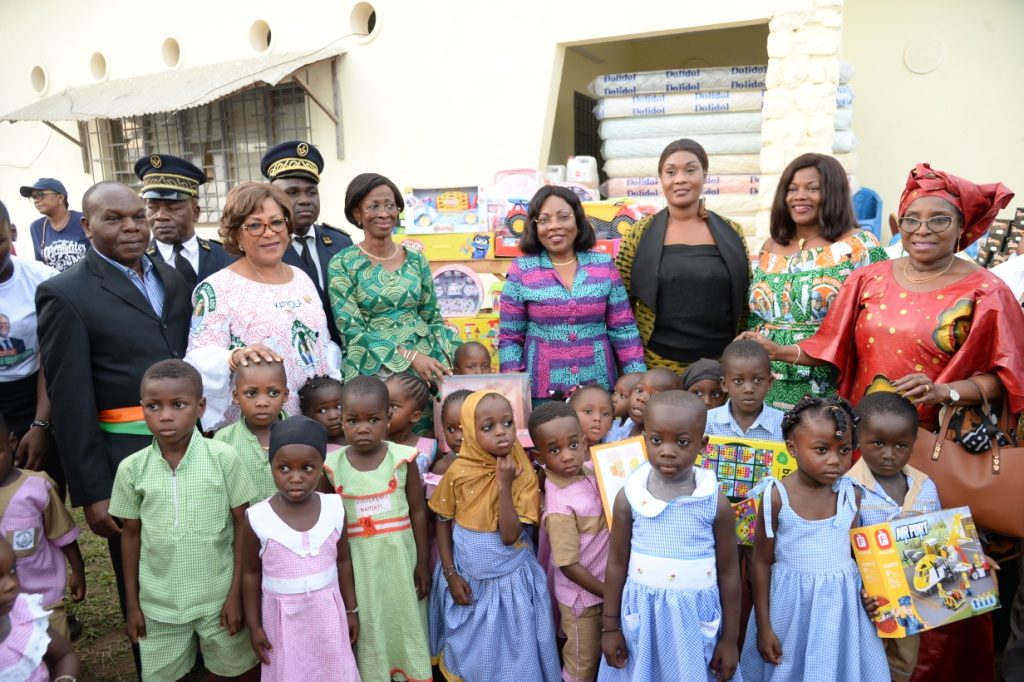 To this end, the wife of the Head of State organized a donation ceremony at the Katiola social centre in the presence of Head of child protection departments and the community.

Mrs Dominique Ouattara, Founder of Children Of Africa was represented by Mrs Bakayoko Ly-Ramata, Minister of Women, Family and Children.  The ceremony witnessed the presence of Mrs Myss Belmonde Dogo, Secretary of State to the Minister of Women, Family and Children; Mrs Virginie Aya Touré, MP of Oumé; Mrs Yao Patricia Sylvie, Chief of staff to the First Lady and many other officials.

These donations, which strengthen the capacity of child protection centres include  rice bags, pasta bags, tomato can boxes and many others, but also non-food items such as cleaning products, toys for toddlers, teaching materials and household appliances. The value of food and non-food items is estimated at 25 million CFAF. In addition to that, Mrs Dominique Ouattara offered 3 million CFA francs to child protection centres. The total value of  in kind and cash donations is  28 million CFA francs.

Mrs Bakayoko Ly-Ramata, Minister of Women, Family and Children, expressed the thanks of all the children of the Hambol region to their generous donor.  She noted the importance of these gift because, according to Ms. Bakayoko Ly-Ramata, they take into account the well-being of children, which represent the future of our country. For Mrs. Bakayoko Ly-Ramata, these donations are also part of government’s social program.  She concluded by arguing that: “Mrs Dominique Ouattara is the image of self-giving”.

Mrs Yao Patricia Sylvie, Chief of Staff to the First Lady, before listing the list of donations, explained the projects carried out by Dominique Ouattara through the Children Of Africa Foundation and the National Committee to Combat Trafficking, Exploitation and Child Labour (CNS).