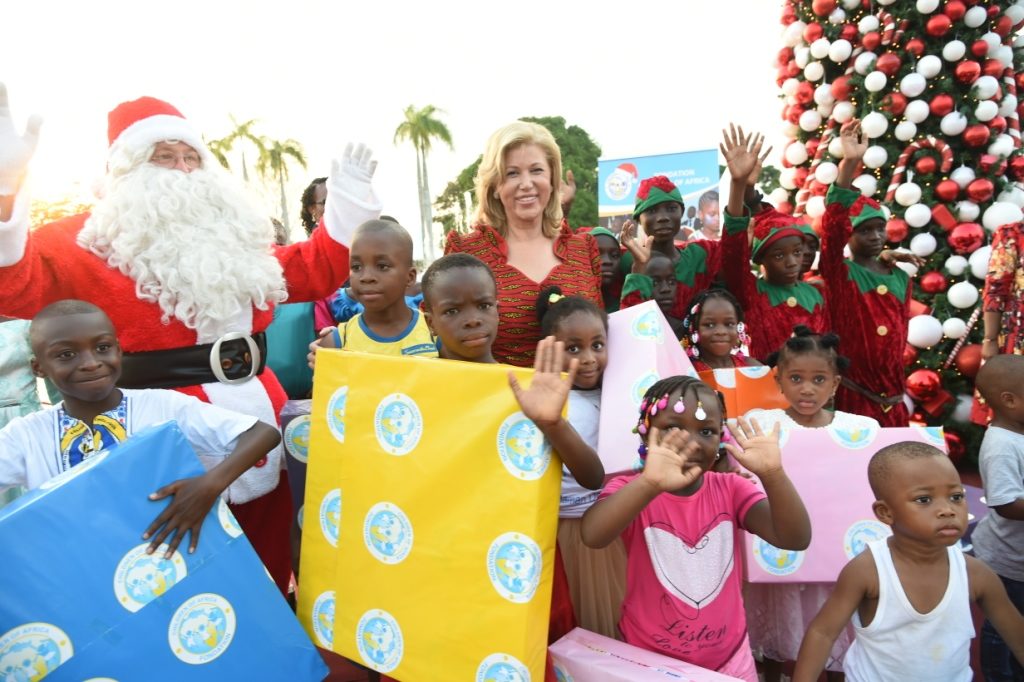 3,000 children from all over the District of Abidjan and a hundred from Adzopé lived the Christmas fairy, Wednesday, December 21, 2016 in the gardens of the Presidential Palace of the Plateau, on the occasion of the traditional Christmas Tree of Children of Africa Foundation. For this edition of her Christmas tree, the Foundation of Madame Dominique Ouattara has doubled the efforts to allow the children to finish the year 2016 in beauty. For the occasion, the gardens of the Presidency of the Republic were adorned with the colors and the magic of Christmas. Inflatable castles, a Christmas Tree decorated with garlands of a thousand and one colors, the Clowns of the Bouldegum and water jets of the pool, gave a festive and magical atmosphere to the presidential palace of the Plateau. The children per thousand stormed early in the afternoon the venue of the ceremony, eager to experience the magic of Christmas. Indeed, between the magic tricks of Tom the Magician, the games of the Bouldegum clown company, the children from 17 associations and NGOs namely the BICE, the children of the Cathedral, the godchildren of the Riviera Mosque, The SOS villages of Abobo and Aboisso, the Grand Bassam orphanage, the Bingerville orphanage, the Servir Foundation, the Children's Lodge, the NGO MINOGE, the NGO OEV, the NGO Bateau d Africa, children of the Ivorian Association for the Promotion of Albino Women, Association of Disinherited Children, NGO Maya, Childhood and Environment, NGO Glimmer of Hope, NGO Wobin, Adzope and the children of the District of Abidjan have not shunned their pleasure by singing songs with their favorite artists invited for the occasion.

Mercury went up a level when Father Christmas from Children Of Africa Foundation made a most notable entry into a helicopter. A moment of magic punctuated by the jostling of the children who were keen to greet the arrival of Santa Claus.

Mrs. Dominique Ouattara, President of Children Of Africa Foundation welcomed the celebration of the Christmas Party with all the children of the District of Abidjan. She did not hesitate to let her joy burst forth in front of all these children joining hands around the Christmas Tree of her Foundation. "This year again, for the Christmas Tree of the Foundation, you are 3,000 children from all the communes of Abidjan and several other cities of the interior of Côte d’Ivoire. All together, we are going to live today in the presidential palace, the Christmas fairy with attractions, shows, and the visit of Santa Claus who came with all his presents "