Accueil » Activités » CNS » Fight against Child Labour in Cocoa Farming: Dominique Ouattara meets with the senators behind the embargo threat on Ivorian cocoa

Fight against Child Labour in Cocoa Farming: Dominique Ouattara meets with the senators behind the embargo threat on Ivorian cocoa 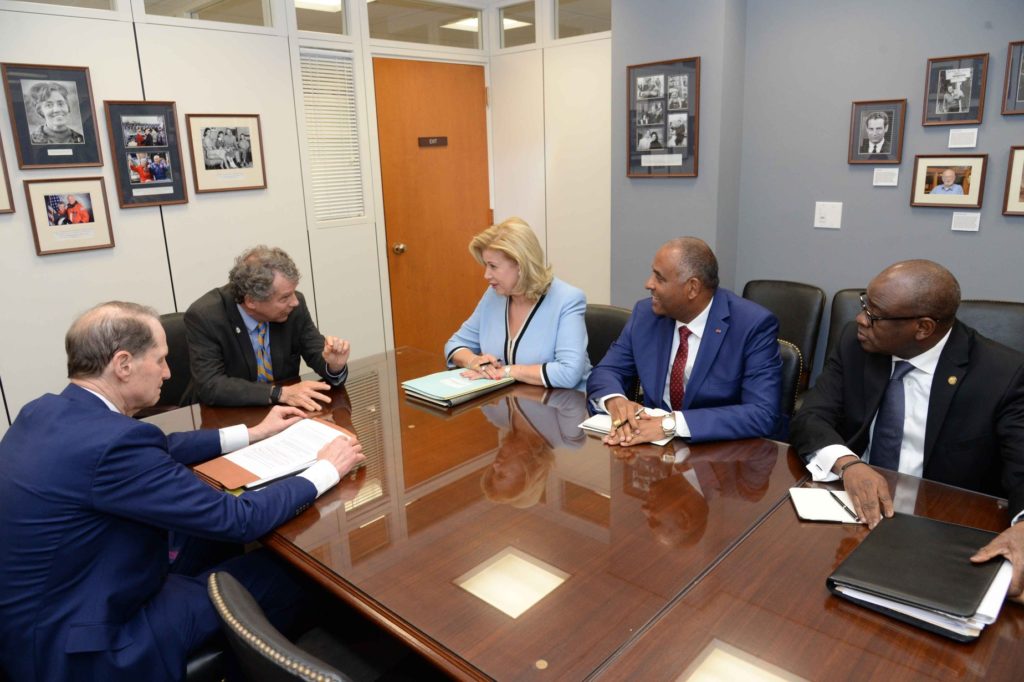 First Lady Dominique Ouattara pursues her diplomatic offensive in the United States of America in order to present her country’s efforts to eliminate child labour in cocoa production.  In view of that, the Chairman of the National Oversight Committee to Combat Child Trafficking, Exploitation and Child Labour (CNS) had an important meeting on Tuesday, September 17, 2019, at the Senate Building in Washington DC, the federal capital of the United States, with Senators Ron Wyden and Sherrod Brown, respectively representatives of the States of Oregon and Ohio in the US Congress.

Since the senators addressed a letter to the Department of Homeland Security of the United States of America to call for an embargo on Ivorian cocoa, the First Lady has decided to meet them, not only to clarify Government of Côte d’Ivoire’s efforts to tackle the issue, but also to explain the serious effects such a decision can have on farmers.

This meeting witnessed the participation of Mr Patrick Achi, Secretary General of the Ivorian Presidency and the Ambassador of Côte d’Ivoire to the United States of America, HEM Haidara Mamadou.

Dominique Ouattara took the opportunity to explain the risks of an embargo on  Ivorian cocoa production at the national level. For Mrs Dominique Ouattara, this measure, if applied, would be a disaster for nearly 6 million cocoa farmers.  “(…) your letter to the Ministry of Security, calling for an embargo on Ivorian cocoa, is of great concern to us. This measure, if implemented, would be a disaster for  thousands of small cocoa farmers and their families who already live in difficult conditions and represent at least 6 million people who make a living from cocoa farming,” she said.

According to Ms Dominique Ouattara, this embargo will not only destroy the country’s stability, but will also have a serious effect on the  country’s economy and the West African sub-region as well.  “Côte d’Ivoire is a haven of peace and an economic oasis for people from neighbouring countries fleeing terrorism and poverty in their countries, the ban will inflict hardship on them. The embargo, far from curbing child labour, would ruin all our efforts ” said Ms. Dominique Ouattara.

Long before that, the wife of the Head of State made a presentation of the country’s efforts since 2012 to tackle child labour issue. Thus, she mentionned the creation of the CNS and the Inter-ministerial Committee to Combat Child Trafficking, Exploitation and child Labour, the implementation of three (03) National Action Plans (NAPs) since 2012, the construction of schools, the adoption of a law on compulsory schooling, the construction of a shelter in soubré to receive disadvantaged children, the creation of police units specialized in child trafficking. She also revealed that to date 220 people have been sentenced to prison terms ranging from 15 to 20 years.  “All our efforts have been recognized by the American Government, which, through the State Department, has repeatedly congratulated us for all our actions and has ranked Côte d’Ivoire among countries making significant efforts to eliminate child labour.” said Dominique Ouattara.

It should be noted that Senators Ron Wyden and Sherrod Brown congratulated the First Lady on her personal commitment and work in the fight against child labour in cocoa production.  They explained that their request was to  urge more tangible action from the cocoa and chocolate industry to eliminate child labour in the cocoa supply chain.