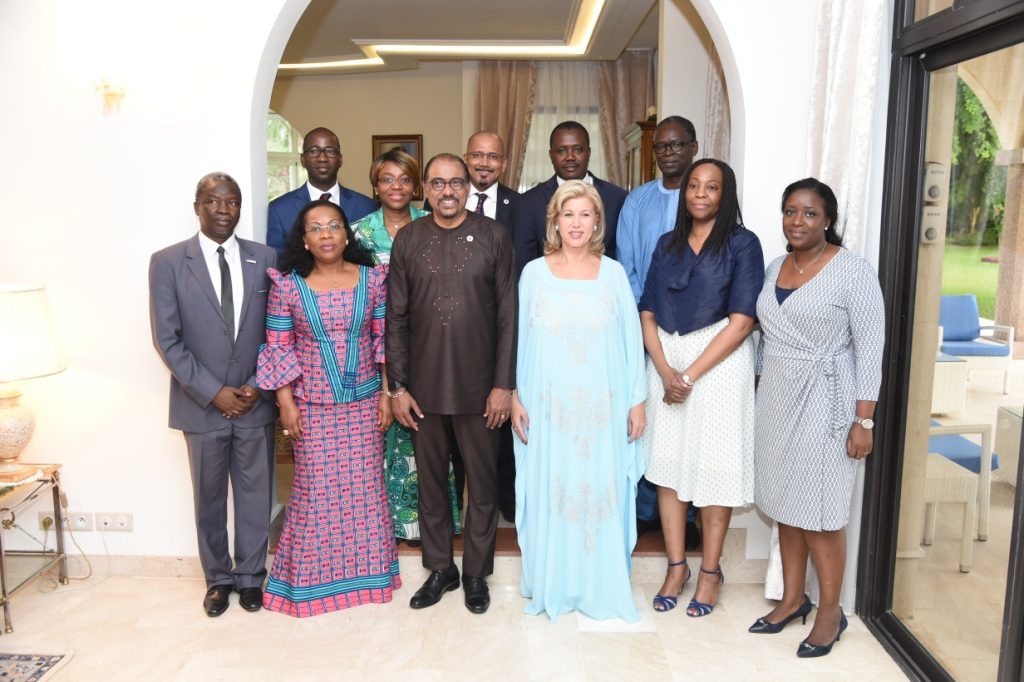 Mrs. Dominique Ouattara, UNAIDS Special Ambassador for the Eradication of Mother-to-Child Transmission of HIV and the Promotion of Pediatric Treatment, received in audience Mr. Michel Sidibé, Executive Director of ONSIDA, on Monday, February 13th, 2017, at the presidential residence.

On a visit to Côte d’Ivoire in the framework of the meeting of the National Committee for Fight against AIDS, Mr. Michel Sidibé, UNAIDS Executive Director, despite his busy agenda, visited the First Lady, Dominique Ouattara.

For a little over an hour, Mrs. Ouattara exchanged with her distinguished guest on various subjects related to her involvement in the fight against the Mother to Child transmission of HIV / AIDS.

At the end of the audience, Mr. Michel Sidibé went back over the reason of his visit, but also, on the various subjects addressed during this meeting. “The object of this meeting was to take stock of the year 2016. I did not have the opportunity to meet the First Lady. It was really exciting to realize that she had the opportunity to have diverse agendas. First, she ensured that there was a technical meeting in Côte d’Ivoire with ministers from different African countries to try to push the agenda on the pediatric treatment of AIDS. Then we had the opportunity at this meeting to discuss her role at the United Nations level. The support she was able to bring to the United Nations system in general, but particularly to UNAIDS, in addressing the elimination of mother-to-child transmission of HIV / AIDS. We also discussed the possibility of continuing this partnership by extending it and seizing the opportunities that will certainly present themselves in Côte d’Ivoire in the near future. First, the Mayors’ meeting that will be hosted in Côte d’Ivoire, the organization of the Francophonie Games in July 2017, and the continental meeting on the fight against AIDS. These are very important meetings in 2017, and our objective is to continue working with the First Lady to mobilize energies in Côte d’Ivoire and elsewhere to end the transmission of the mother-to-child HIV / AIDS, “said Michel Sidibé.

As a reminder, First Lady Dominique Ouattara was appointed UNAIDS Special Ambassador for the Eradication of Mother-to-Child Transmission of HIV and for the Promotion of Pediatric Treatment on December 18,  2014 by UNAIDS.