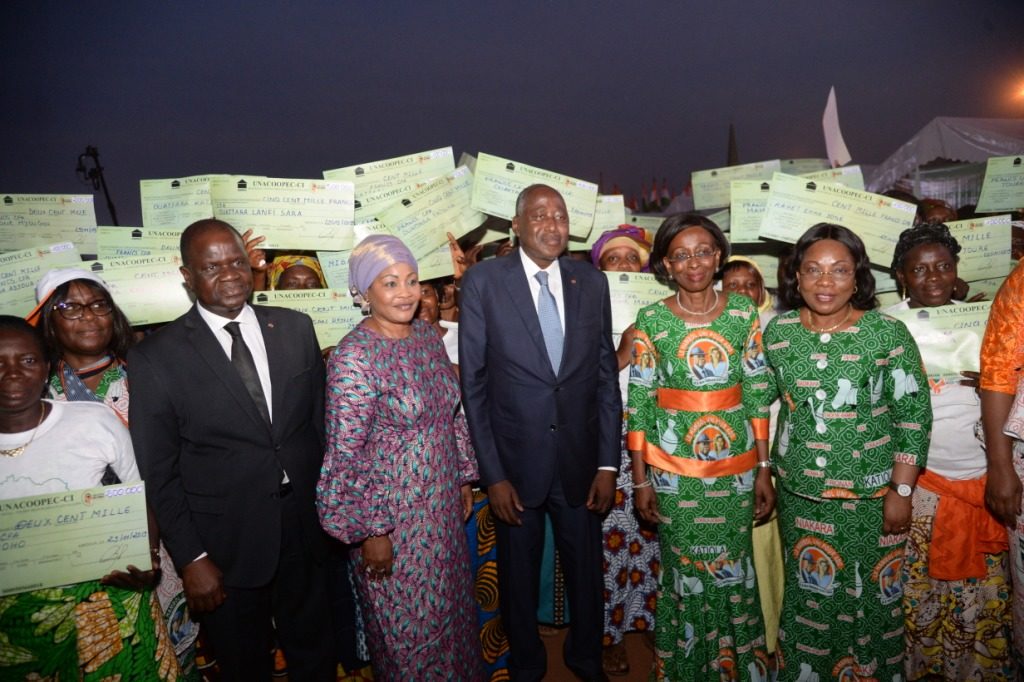 As part of the FAFCI program, First Lady Dominique Ouattara granted additional funding to women in the Hambol region on Friday, November 29, 2019.   On the sidelines of President’s state visit in the region, the First Lady has decided to provide support  to women in order to fight poverty in this region.

In addition to this funding, the First Lady also provided food and non-food donations worth more than 500 million CFA francs to women.

The donations ceremony witnessed the presence of Prime Minister Amadou Gon Coulibaly, Head of Government; Mrs Bakayoko Ly-Ramata, Minister for Family, Women and Children and several members of the government.

Prime Minister Amadou Gon Coulibaly, representing President Alassane Ouattara, argued that his presence at the ceremony shows the  commitment of the Head of state to women’s wellbeing. It is a sign of support to  women’s empowerment.

Mrs. Bakayoko Ly-Ramata, Minister of Family, Women and Children, representing the First Lady, said that the First Lady would have loved to share these moments of conviviality with her sisters of the Hambol region.   The Minister  also took the opportunity to congratulate Prime Minister Amadou Gon Coulibaly for Government social policy.  She also listed the measures taken by the Government to improve gender equity  in Côte d’Ivoire.

Camara Thomas, Mayor of the commune of Katiola, thanked the First Lady for her humanitarian and social commitment. Mrs Touan Célestine President of the Union of Women’s Associations of Katiola also expressed her heartfelt thanks to the First Lady.