Mobilization against sexual violence against women in conflicts at Paris 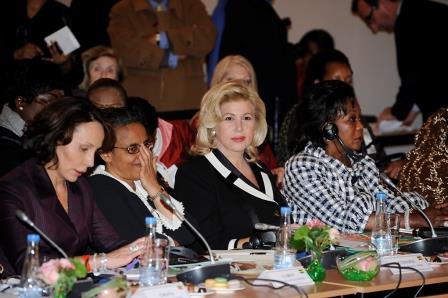 Mrs. Dominique Ouattara during the Summit of First Ladies against violence against women in conflict

On the sidelines of the Elysée summit for Peace and Security in Africa , Valérie Trieweiler , First Lady of France, organized in Paris ( Musée d'Orsay ) last Friday, December 6th a mobilization meeting of African First Ladies against sexual violence against women in conflict.

They came from Côte d'Ivoire, Burkina Faso, Burundi, The Gambia, Ghana, Mali, Chad etc. Or twenty First Ladies. At their side, Mrs. Zainab Hawa Bangura, Special Representative of the UN Secretary General in charge of the fight against sexual violence in armed conflict and Margarida Barroso (wife of the President of the European Commission). The panel organized allowed the wife of each head of state to present on the situation in her country and make proposals.

"Our country devotes significant attention to human rights and especially to the protection of vulnerable populations, including women and children, and minorities. We have a Constitution that guarantees the rights of all female citizens and all citizens which legal provisions protect women and girls", said Mrs. Dominique Ouattara , First Lady of Côte d' Ivoire. Before exposing the statistics collected by the platforms against violence based on gender. For Mrs. Dominique Ouattara 159 cases of rape have been recorded in 2010. 656 cases in 2011, and 578 cases in 2012. The most affected districts are believed to be those which saw some of the country's fiercest fighting between 2002 and 2011.