Accueil » Activités » Mrs. Dominique Ouattara, during the signing of a book : “I hope that this book will be useful to current and future generations, to contribute to the construction of a united and fraternal nation”

Mrs. Dominique Ouattara, during the signing of a book : “I hope that this book will be useful to current and future generations, to contribute to the construction of a united and fraternal nation” 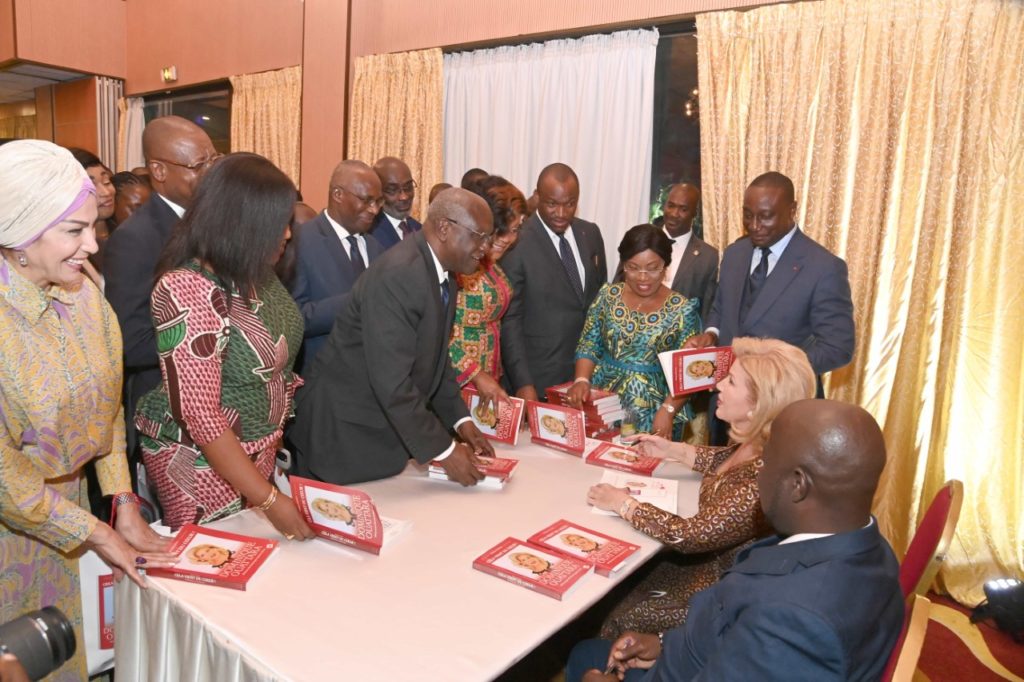 “It comes from the heart! Dominique Ouattara: 100 speeches illustrated by photos. This is the title of the book speech of Mrs. Dominique Ouattara, First Lady of Côte d’Ivoire officially presented on Wednesday, October 19, 2022, to personalities and journalists present in large numbers at the Latrille Events 2 Plateaux.

Composed of 390 pages and 170 photos, this book, as its name indicates, is essentially a collection of the main speeches of Mrs. Dominique Ouattara that she had to deliver for 10 years on subjects related to her humanitarian commitment for the weakest and the poor.

Produced by journalist Philippe Kouhon, this book is intended to be a testimony for posterity and a lesson in love and self-sacrifice for good causes. It was prefaced by Mrs. Anne Désirée Ouloto, Minister of Public Service and Modernization of the Administration. And the forewords of the book are by the journalist Alafé Wakili.

It should also be noted that the rights of the book will be entirely donated to the Children of Africa Foundation.

Explaining her support for this project, the First Lady explained that this book allows her to highlight the values of her commitment to the poorest. “(…) It would highlight the values that underpin my vision and that have underpinned my actions for several decades. By accepting that these speeches are highlighted, it is a way for me to reaffirm the various commitments I have made, and to share them with Ivorians who love peace and altruism,” explained Mrs. Dominique Ouattara. Taking advantage of this platform, the First Lady returned to the meaning and her role as First Lady.  Indeed, returning to the subjects of her commitment, the wife of the Head of State explained in detail the reasons that lead her to undertake actions for the greater benefit of the poor. The fight against child labor, her humanitarian commitment with the Children Of Africa Foundation, her commitment as UNAIDS Special Ambassador for the elimination of mother-to-child transmission of HIV and the promotion of pediatric treatment and many other areas were all mentioned by the First Lady. “All these commitments that I have just recalled constitute the framework of this book, and these speeches that come from the bottom of my heart are crowned by the call that I have always made for peace and social cohesion in our country. It is an exhortation to live together so dear to all Ivorians, that I do not forget to mention in each of my speeches, to our sisters in particular, so that they are actors of peace in their families and in their respective communities, “explained Mrs. Dominique Ouattara. In conclusion, the First Lady congratulated all the people who worked on the realization of this work. “I would like to conclude by congratulating the teams of my Foundation and my Cabinet, as well as the entire team that worked to produce this beautiful book. You have done a remarkable job of research and illustration, which I commend. I hope that this book will be useful to current and future generations, to contribute to the construction of a united and fraternal nation,” she expressed the wish.

Mrs. Anne Désiré Ouloto, Minister of Public Service and Modernization of the Administration and prefatory author of the collection of speeches delivered a testimonial speech on the life and commitment of the wife of the Head of State. “I am so happy and particularly honored, thanks to you, and with you, to try my hand at writing, to bear witness, and reveal to the world the greatness of your generosity, of your love for the most vulnerable, for the voiceless,” explained Madame Désirée Anne Ouloto. Before adding: “Your  generosity, love and spirit of solidarity, were not told to me. No! I lived them at your side, for many years before 2010, and from 2010 to this day”.

Mr. Tiburce Koffi, Chairman of the Board of Directors (PCA) of BURIDA, also a literary critic, took a critical look at the book. Indeed, for about ten minutes, the literary critic gave his impression on the form and content and many other elements of the book. He also added: “For me, everything that closely or remotely concerns Madame Dominique Ouattara is good. Because Madame Dominique Ouattara is good. Great in the head, great in the heart, great in the hand. So the book that speaks of her is necessarily good.