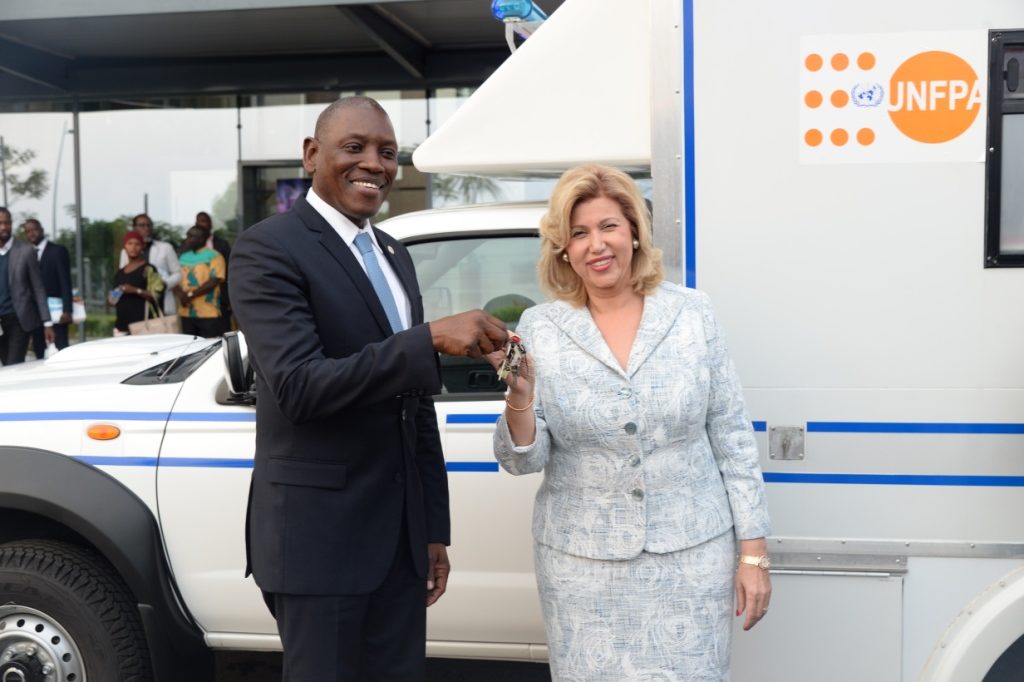 The United Nations Population Fund (UNFPA) has donated an ambulance to the Dominique Ouattara Mother and Child’s Hospital in Bingerville on Tuesday, December 18, 2018.

This donation is the materialization of the promise made by Mr. Mabingue Ngom, UNFPA Regional Director, on October 8, during a visit he made to Mrs. Dominique Ouattara, President of Children of Africa Foundation.

UNFPA  in this way  contribute to the improvement of health and the living conditions of the mother and the child.

Mrs. Dominique Ouattara also hailed this initiative which reinforces the equipment of the MCH of Bingerville. “Thank you for your support. This significant gift complements the mobile equipment we already have. The ambulance will allow for greater capacity for action. The Mother-Child’s Hospital in Bingerville will be able to intervene more effectively with populations, even those who are furthest away, “she said. Before that, the President of Children Of Africa has proudly noted the results of the hospital since its inauguration. According to her, the Children’s Hospital receives several hundred patients a day. In addition, since its opening, the hospital has registered more than 264 deliveries. “In addition, 25% of the patient is made up of poor people who are cared for and treated free of charge at the MCH,” said Dominique Ouattara. She also revealed that the children’s home will be completed very soon. “This shelter will be used to house children who will be in long-term treatment away from their homes, to relieve families” she said.

Mr. Mabingue Ngom, UNFPA Regional Director for West and Central Africa, for his part, welcomed the commitment of Mrs. Dominique Ouattara for the improvement of the living conditions of the mother and the child. According to Mr. Mabingue Ngom, the ambulance donation is the beginning of a partnership between UNFPA and Children of Africa Foundation. This partnership is justified through the synergy of action between the two organizations. He ended by saying his admiration for the First Lady’s commitment to the well-being of African children.