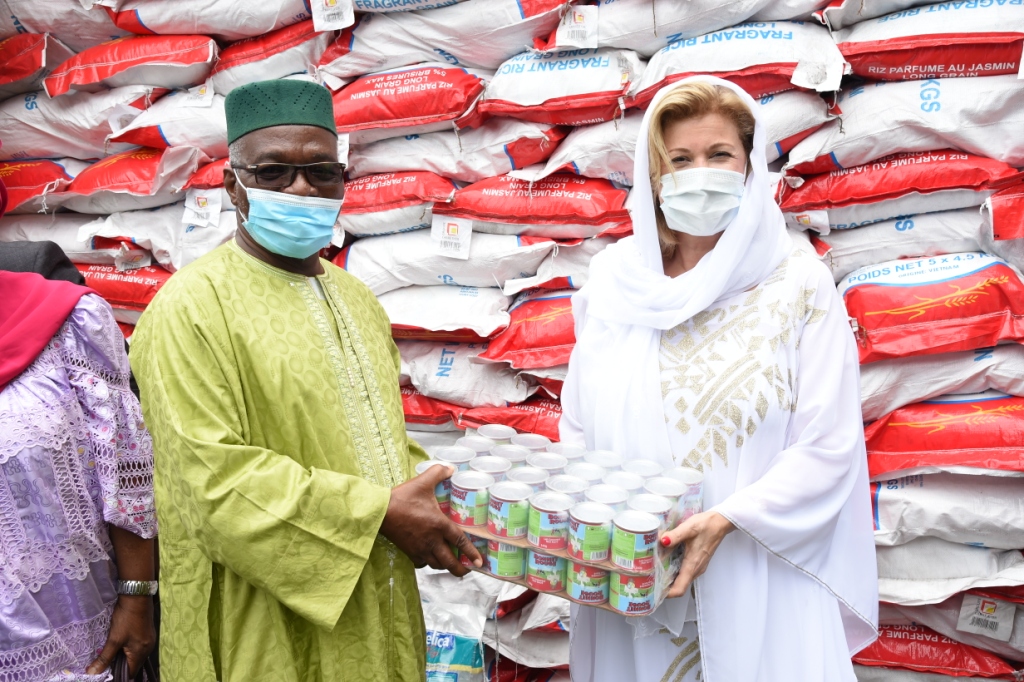 Mrs. Dominique Ouattara, President of the Children Of Africa Foundation has offered foodstuffs worth 100 million CFA francs to the Muslim community on the occasion of the month of Ramadan.

The donations ceremony took place at the headquarters of the Children Of Africa Foundation in Cocody. It witnessed the presence of                               Mrs. Bakayoko Ly-Ramata, Minister of Women, Family and Children, Imam Cissé Djiguiba, Rector of the Plateau Mosque, representing the Higher Council of Imams (COSIM), Muslim religious leaders and NGOs and Islamic Associations.

The Muslim community has began their fasting Since Friday, April 24. A time devoted to meditation, spiritual devotion and charity. Unfortunately the holy month of ramadan is affected by the measures taken to fight against Coronavirus disease in Côte d’Ivoire and the world. That is why, Mrs. Dominique Ouattara, President of the Children Of Africa Foundation, called on religious leaders to pray not only for peace in Côte d’Ivoire and the end of Covid-19, but also for the Head of State. “(…) I would like to ask you to pray for the end of the coronavirus in the world and for peace and stability in our country. I would also ask you to pray for my dear husband, President Alassane Ouattara so that he may have good health to lead the country”, she said. Long before that, Mrs. Dominique Ouattara emphasized on how coronavirus has changed ramadan this year. “(…) As we know, the barrier measures enacted by the Government to halt the disease involve the closing of places of worship. Similarly, collective break of fasting, which is an opportunity to practice charity, is also not allowed during this period,” she noted. However, for Ms. Dominique Ouattara, these measures should encourage greater solidarity with the poor. “If gatherings are forbidden, spirituality must remain alive and this is the time to enhance our efforts to help the most deprived,” she ended.

Long before Mrs. Dominique Ouattara, Mrs. Bakayoko Ly-Ramata, Minister of Women, Family and Children, thanked the generous donor for her spirit of solidarity and charity towards her fellow citizens. “Madam First Lady, when we talk about you, the words that come to our mind are generosity and charity. Most people living in this country have once benefited from your donations. Madam First Lady, you are a blessing to our country,” she said.

Imam Cissé Djiguiba, representative of the Superior Council of Imams (COSIM), on behalf of Cheick Aïma Boikary Fofana, thanked Mrs. Dominique Ouattara for the donations.  For the latter, this support to the Muslim community has a high spiritual significance. He expressed his gratitude and spoke about the admiration he has for the wife of the Head of State for all her actions towards the poor.