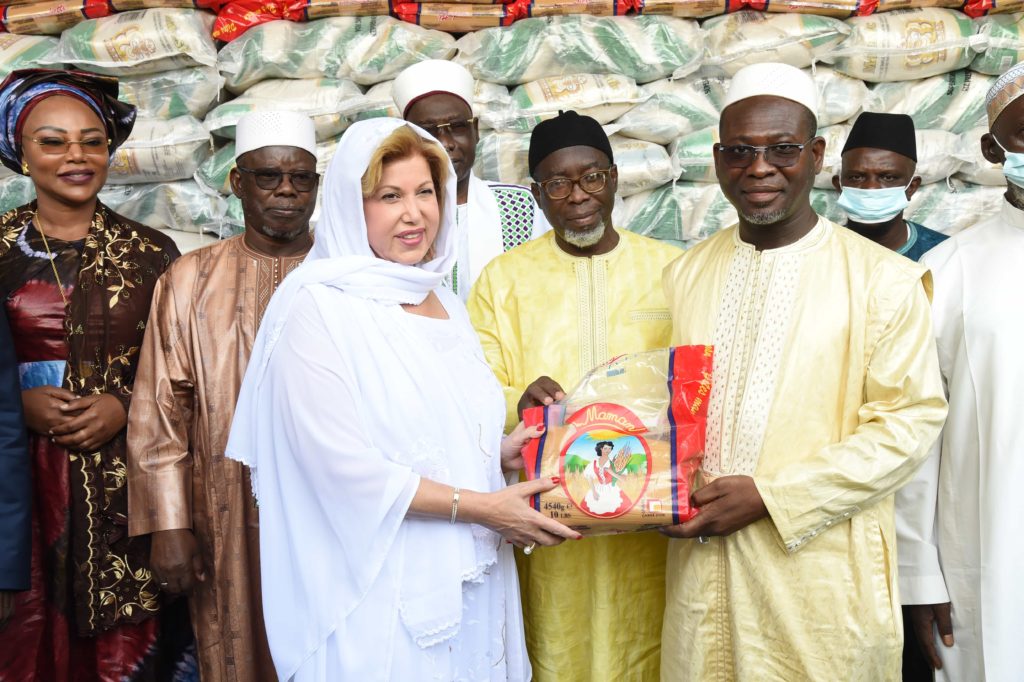 First Lady Dominique Ouattara, President of the Children Of Africa Foundation, has offered food worth 130 million CFA francs to the Muslim community on the occasion of the month of Ramadan. And this, forty-eight (48) hours after she offered food supplies to the Christian community for easter celbration.

The donation ceremony  took place on Thursday, April 14, 2022, at the Office of the First Lady located in Cocody. It witnessed the presence of General Diomandé Vagondo, Minister of Security and Interior, Mrs. Mys Belmonde Dogo, Minister for  Solidarity and Poverty Reduction, Mrs. Nasseneba Touré, Minister of Women, Family and Children, Mr. Drissa Koné and Mr. Messamba Bamba, respectively Special Advisor to the President of the Republic in charge of Religious Affairs and Director General of Religious Affairs, as well as religious guides and Muslim associations representatives.

The food supplies comprising 3,000 bags of rice , 3,000 boxes of pasta, 1,500 boxes of sugar, 1,250 boxes of oil cans, 750 boxes of tomato paste and 400 boxes of milk were donated to religious guides, mosques and to about sixty NGOs and Muslim associations.

Taking the floor Mrs. Dominique Ouattara explained the reason for making these donations.  For the wife of the Head of State, it is important to take action and show solidarity to enable impoverished Muslim families to fully enjoy the month of Ramadan. “(…) We are now in the month of Ramadan, which is a month of fasting, repentance and blessing for the Muslim community. During this period of great spirituality, our brothers and sisters need support in order to be able to fulfill the fasting in peace. Thus, every year, the Children Of Africa Foundation proceeds to donations of food, to allow our brothers and sisters to fully enjoy the month of Ramadan,” said Mrs. Dominique Ouattara. Mrs. Dominique Ouattara also asked the religious leaders to pray for peace and stability in the country. According to the wife of the Head of State, this is important for the development of our country. In addition, Mrs. Dominique Ouattara asked the religious leaders to support the Head of State through prayers so that he carries out his mission in a peaceful environment. “Dear religious leaders, before I close my speech allow me to request your prayers for peace and in our country. I also ask you to pray for my dear husband, President Alassane Ouattara who really needs your prayers to carry out his mission,” said Mrs. Dominique Ouattara.

General Diomandé Vagondo, Minister of Interior and Security, thanked Mrs. Dominique Ouattara for this meaningful gesture of solidarity and sharing in this month of high spirituality. He called for the blessings of the Most High on the life of the generous donor, as well as on the President of the Republic. “… Given the assistance received by both Christians and Muslims at a time of high spirituality for these religious communities, I would like to invite them to pray that the First Lady and her husband, H.E. Alassane Ouattara, President of the Republic of Côte d’Ivoire, receive abundant blessings from the Lord.”he urged religious leaders.

Imam El Hadj Koné Daoud, Executive Secretary of the Superior Council of Imams of Côte d’Ivoire (COSIM), representing Sheikhoul Aïma Ousmane Diakité, President of COSIM, also thanked the wife of the Head of State for her act of generosity.