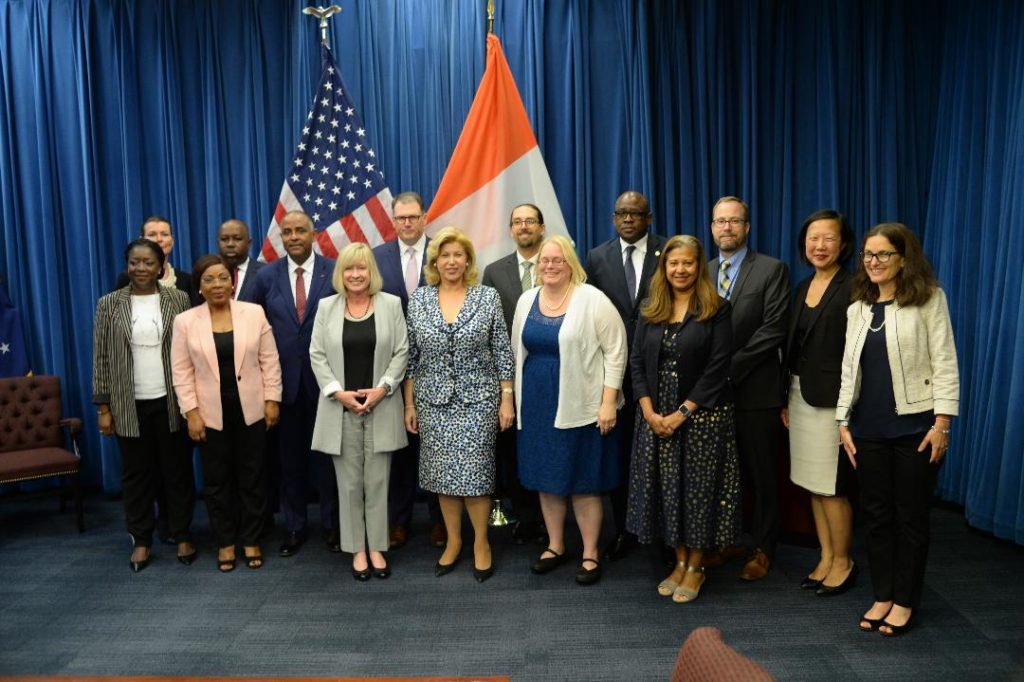 The First Lady ended her misison in Washington DC on Friday, September 20, 2019. For this last day, two important meetings were on the agenda. The first meeting was a  working session with the National Democratic Institute (NDI), a strategic and very influential partner in the American administration. NDI President Derek Mitchell attended the meeting whith his whole team.

The Chairman of the National Oversight Committee to Combat Trafficking and the Worst Forms of Child Labour took this opportunity to present her country’s efforts since 2011 when President Ouattara took office, to address the scourge. She also mentionned  the new commitments and initiatives taken  through the implementation of the National Action Plan 2019-2021.

Ms Dominique Ouattara indicated that she is in the US to discuss with  the American political and administrative authorities and the civil society organizations about the embargo threat on Ivorian cocoa  . According to her, the embargo threat on the Ivorian cocoa as requested by Senators Sherrod Wyden of Ohio and Ronald Brown of Oregon would ruin the important progress the country has made so far. The discussion also focused on the support that the First Lady provides to women through the  Ivorian women support’s fund  (FAFCI) initiative, which has helped 200,000 women to date. This initiative indeed  remains a real tool to fight poverty.

NDI has shown a strong interest in the success of this project which targets women who do not have access to bank loan  and is considering a partnership for a similar project.

In the same vein, the Secretary General of the Presidency, Minister Achi Patrick, outlined the measures that the Ivorian government has taken to promote women’s entrepreneurship. Before closing the working session, The First Lady presented her humanitarian commitment through the Children Of Africa Foundation, she created 22 years ago in Washington, D.C., when her husband was Deputy Managing Director of the International Monetary Fund (IMF).

The President of NDI congratulated the President of the Republic and his wife for their leadership. For him, the Ivorian presidential couple is a model for Africa.

A meeting that took place in a good atmosphere.

The second meeting of the day took place at the US Department of Labour (USDOL) in a Warm and friendly atmosphere. The two teams know each other well and meet regularly as part of the Cocoa Cordinating Group (CLCCG) meeting to Combat Child Labour in Cocoa Production.  Ms. Martha Newton Under-Secretary for International Labour Affairs was very clear: Côte d’Ivoire’s cooperation with USDOL is excellent.

Regarding the embargo threat, Mrs. Martha Newton said that  Côte d’Ivoire is a model country in the fight against the worst forms of child labour. That is why it has been ranked among the countries making the most significant efforts in the world in recent years.

Mrs. Martha Newton then reassured Mrs Dominique Ouattara of her support and encouraged her to keep on fighting to tackle this phenomenon.

“Your leadership is essential, I urge you to continue the good work and step up efforts. You are the only First Lady able to speak about a survey on child trafficking and exploitation and this shows your leadership,” said the Under-Secretary for International Labour Affairs.