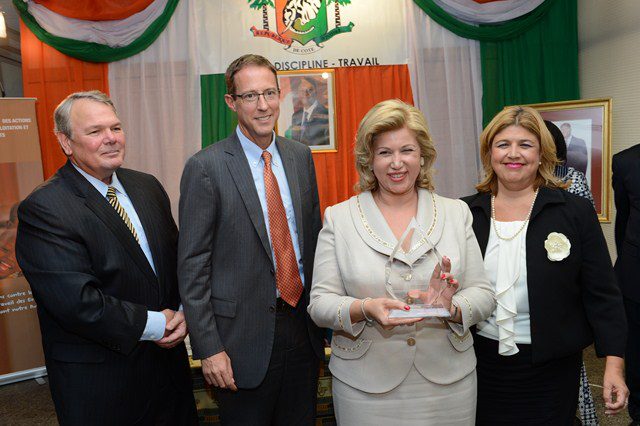 On a working visit (from 18 to 23 July 2012) in the United States (Washington, DC) at the invitation of Secretary of State, Mrs. Hillary Diane Rodhan Clinton, the Ivorian First Lady multiplies her contacts in the framework of the fight against trafficking and the worst forms of child labor in Côte d'Ivoire. 24 hours after her arrival, Mrs. Dominique Ouattara, President of the National Oversight Committee (NOC) of fight against trafficking and the worst forms of labor, accompanied by the Vice-president of the Inter-ministerial Committee, Mrs. Coffie Goudou Raymond and Mrs. Patricia Yao Sylvie, Executive Secretary of the NOC, were received at the SENATE by Senator Tom Harkin and Congressman Eliot Engel, the initiators of the ''Harkin Hegel'' protocol. A working session over a lunch. The Ivorian delegation even attended a vote at the SENATE. Then the delegation went to the Ivorian chancellery at 2424 Massachusetts Avenue, North West, Washington DC, 20008. The First Lady has received, at the Presidential Office, Eric Biel, Deputy Secretary of Labor for International Affairs and child labor. The efforts of Côte d'Ivoire in the fight against child labor were at the heart of discussions. A few moments later, on the ground floor of the Ivorian representation, we witnessed the signing of a MOU between the World Cocoa Foundation and the Ivorian Government represented by the President of the National Oversight Committee (CNS), Mrs. Dominique Ouattara and Mr. Bill Guyton, Chairman of the World Cocoa Foundation. By this act, the American chocolate makers affirm their commitment to assist the Government of Côte d'Ivoire in its fight against the use of children in cocoa production. In addition, the Foundation is committed to investing in the field of literacy, building schools and especially to cocoa farmers entrepreneurs. For her fight for the welfare of children, the World Cocoa Foundation awarded Mrs. Dominique Ouattara with a prize symbolized by a trophy. On which it is inscribed "Presented to First Lady Dominique Ouattara, in grateful recognition of your leadership on Behalf African Women and Children, Washington, DC, July 19, 2012."