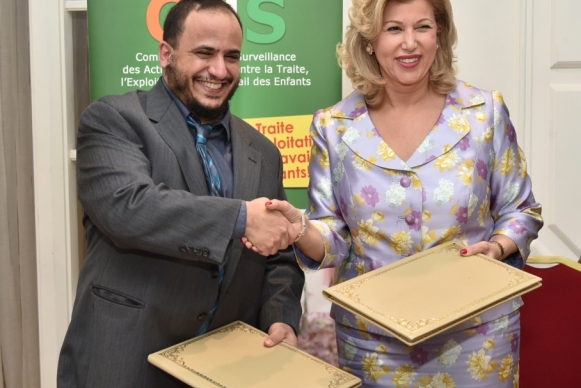 In a few weeks the University of Chicago’s NORC institution, specializing in social science studies, will conduct a survey in Côte d’Ivoire on child labor in cocoa production.

In order to give every chance of success to this new investigation, the First Lady, Dominique Ouattara, moreover, President of the National Committee for Monitoring Action against Trafficking, Exploitation and Child Labor (CNS) proceeded signing a memorandum of understanding with this institution.

The signing ceremony of this agreement comes after the holding of a validation workshop of the methodology of the 2018-2019 survey on Child Labor in cocoa production zones in Côte d’Ivoire which allowed to sit down a consensual investigation method between the CNS and NORC.

For Mrs. Dominique Ouattara, First Lady of Côte d’Ivoire, the signing of this Memorandum of Understanding allows for a common and consensual approach to take full measure of the phenomenon of child labor in cocoa plantations. “This is the third survey funded by the USDOL. Through this agreement, the partners agree to work together on all aspects of the survey methodology and to bring their common expertise to each step. I welcome the signing of this cooperation agreement, which will involve our national experts in this survey, while respecting international standards, “she noted. For the President of the CNS, this survey will assess all efforts made by Cote d’Ivoire to eliminate child labor. However, it urged all stakeholders to take into account Ivorian norms, particularly the two decrees authorizing children between the ages of 13 and 16, to perform so-called socializing work. The wife of the head of state said that this agreement will also get a more faithful representation of the prevalence of children victims of this situation. “The research, its findings and recommendations, will help us to guide our awareness campaigns to parents, to explain to them that children are allowed to do light work called socializing and not dangerous work that endanger their child. health and their survival.

The president of the CNS, stressed that large investments were made to improve the standard of living of cocoa farmers and budget lines were granted for the construction of schools in the cocoa zones. Adding that awareness-raising campaigns have been conducted for the benefit of the people regarding the fight against the worst forms of child labor. Sub-regional cooperation strengthened with the signing of several sub-regional agreements.

According to Kevin Hong, International Relations Officer at the United States Department of Labor (USDOL), there is a need to help children flourish.

As for Davide Mosby, head of the Political and Economic Section of the United States Embassy in Côte d’Ivoire, he encouraged the Ivorian government to build on this momentum. He expressed the hope that the good collaboration between the two countries would be maintained.