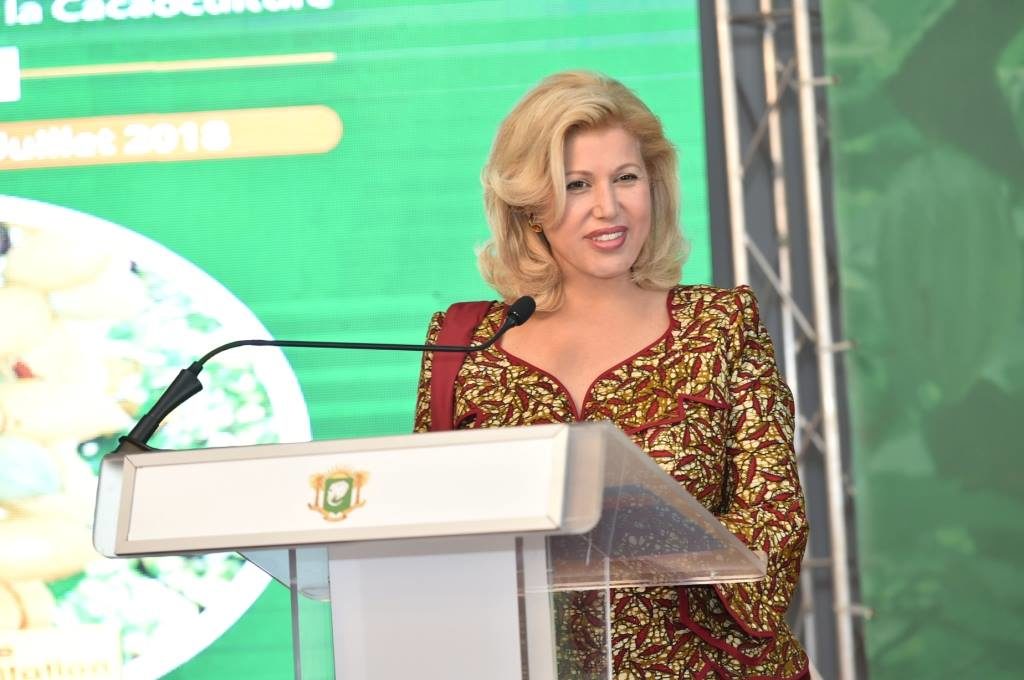 It is a pleasure for me to welcome you to the  8th annual meeting of the child labour cocoa coordinating group.

I would like to thank the governments of the United States and Ghana, for this opportunity given to us to host for the first time this important meeting.

Now, I would like to welcome the United State Delegation headed by Mrs Martha NEWTON, Deputy Undersecretary for international affairs, Mr. Kevin WILLCUTTS and Mr. John UNDERDAL PIERCE, who specially came from Washington for the occasion.

I also welcome Honorable Ignatius Baffour AWUAH, Minister of Employment and Labour Relations of Ghana, Honorable KWAME Ayimadu Antwi, Member of Ghana Parliament, and members of their delegation. I welcome their participation to this high level meeting.

I would like to extend my greetings to Mr. ABINAN Kouakou Pascal, Minister of Employment and  Social Protection ; Mrs BAKAYOKO Ly Ramata, Minister for Women, Family and Children, respectively President and Vice-president of the Interministerial Committee to Combat Child Labour in Côte d’Ivoire.

I now wish to extend my greetings to the Governor of the District of Abidjan, as well as all the administrative and political officials  attending the meeting.

I also extend my greetings to Ambassadors and Head of diplomatic mission accredited to Côte d’Ivoire, as well as representatives of the United Nations Agencies and International Organizations operating in our country.

My greetings also go to Mr. Yves Brahima KONE, Director General of the Coffee-Cocoa Board, to Mr. Tim McCOY, Vice-President of the World Cocoa Foundation, and to cocoa and chocolate Industry Representatives for their valuable support in the elimination of child labour.

At the same time, I express my greetings to  representatives of the civil society and representatives of cocoa farmers cooperatives. Their presence to this meeting shows community’s commitment to the fight against trafficking, exploitation and the worst forms of child labour.

Finally, allow me to greet our traditional and religious chiefs for their prayer and benediction.

Thank you all for responding favourably to our invitation.

This year’s CLCCG annual meeting will focus on the following theme: « Building Momentum : Accelerating good practices to combat child labour in the cocoa sectors in Côte d’Ivoire and Ghana ».

Indeed, this meeting truly meets the priority mission of the  CLCCG, which is to encourage effective coordination of actions to combat the worst forms of child labour in the cocoa production chain, and to measure progress.

It also offers us the opportunity to renew our commitment to eliminate the worst forms of child labour in cocoa production and provides a formal framework for collaboration and experience sharing between various stakeholders.

As you must be aware, the 2016 global data published by the ILO on child labour and modern slavery indicate that in the world almost 152 million children aged 5 to 17 are forced to work. And more than 72 million of them are in sub-Saharan Africa, which means that one in five children in Africa is forced into child labour.

Among these 72 million child laborers in sub-Saharan Africa, over 85 percent work in agriculture.

In this context, the President of the Republic Alassane OUATTARA created in 2011 two committees to respond effectively to child labour issue in Côte d’Ivoire.

These are the National Oversight Committee (CNS) and the Interministerial Committee (CIM) for fight against trafficking, exploitation and the worst forms of child labour.

Knowing my commitment to children’s welfare, the President of the Republic asked me to chair the CNS, which is composed of Government officials, national and international organizations working to promote child protection.

CIM, for its part, is chaired by the Minister of Employment and  Social Protection and is composed of all the Ministries in relation to this issue.

Withing the framework of these committees, we have elaborated and monitored two national plans of action (2012-2014 et 2015-2017) to fight trafficking, exploitation and the worst forms of child labour in all economic sector of our country.

In accordance with these strategic plan,  we have carried out numerous actions in the areas of prevention, protection and repression, with a view to effectively combating this phenomenon.

First, in the area of ​​prevention, we have carried out national awareness campaigns to inform and sensitize the public. Thanks to these public awareness campaigns our people, especially our farmers understand what child labour is and the type of activities that are punished by our national legislation.

We have also trained actors involved in the remediation process, so that they can intervene effectively on the ground. These are prefects, prosecutors, labour inspectors, social workers, journalists, law enforcement officers… who attended training seminars for this purpose.

In addition, Côte d’Ivoire has made school compulsory since September 2015, forcing parents to enroll all children from 6 to 16 years old. This was not the case earlier on.

In this context, the Government and its partners have built thousands of classrooms and school infrastructure to ensure children’s access to school in our country. This measure was very important to us, because we believe that a child in school is protected from the threat of exploitation.

At sub-regional level, we have strengthened bilateral cooperation with neighboring countries to fight against cross-border child trafficking.

This was achieved through the signing of bilateral agreements with the First Ladies of Mali, Burkina Faso and Ghana.

In the same context, we initiated and hosted in October 2017, the Conference of First Ladies of West Africa and Sahel in Abidjan, which brought together 17 countries.

This conference allowed us to join efforts to fight more effectively against trafficking and the worst forms of child labour in our respective countries.

At the end of the meeting, the First Ladies signed a Joint Declaration to Combat Child Labour. We also made the decision to meet regularly to discuss about this issue.

Secondly, in the area of ​​child protection, child victims’ care is carried out by the Ministry for Children, with the active support of NGOs and partners.

In addition, the Children of Africa Foundation, which I chair, has taken the initiative to build three shelters with funding from our generous donors to provide assistance to child victims of exploitation.

As you have just seen in the film that was shown, the first shelter built in Soubré, in a cocoa production area was inaugurated on June 7, 2018. The two others are under construction.

This initiative by the Children of Africa Foundation will help in providing assistance to child victims. It will also help to respond more effectively to the specific needs of children in emergency situations.

Thirdly, in the area of ​​repression, Côte d’Ivoire has a specific law on the prohibition of the worst forms of child labour.

It has already resulted in the sentencing of 93 perpetrators and has enabled to rescue 83,000 child victims.

These arrests were made possible due to the daily intervention and operations carried out in risk areas by the Child labour Police Unit and Interpol. I would like to congratulate them on their work.

We also had several discussions in Geneva and Washington concerning the criteria for measuring and categorizing working children. At the end of these discussions with ILO and partners, Côte d’Ivoire adopted in June 2017, the list of light or socializing work authorized for children between 13 and 16; and the list of hazardous  work prohibited to children.

In fact, these provisions will enable to differentiate farmers’ children  who help their parents on farm after school hours and children who are really victims of trafficking and exploitation.

This progress will allow to take into account our social and economic realities when conducting child labour survey. It will also enable to involve the population in the efffort to address the scourge.

As a result of this preliminary work, the indicators used for future surveys to measure child labour in cocoa production will be much more relevant and in line with the real situation of farmers and their children.

These new indicators for measuring child labour will be decided in collaboration between the United States Department of Labor, ILO, the National Institute of Statistics and NORC.

« Eliminating child labour » from the cocoa production chain in our countries is neither a slogan nor a mere statement. It is a collective responsibility that requires strong commitment and determination from all stakeholders.

The objective is to guarantee the sustainability of the cocoa sector, and above all to protect our children and ensure a better future for them. For this, we will need to leverage new partnerships to expand our actions at the national and sub-regional levels.

At this stage of my remarks, I would like to thank the US Department of Labor, the Coffee-Cocoa Council, as well as NESTLE, BARRY CALLEBAUT, MARS, MONDELEZ, CARGIL, OLAM, ECOM, TOUTON, CEMOI, HERSHEY, TONY’S, TWININGS et SUCDEN companies, for their effort to eliminate the worst forms of child labour and improve the living conditions of our farmers.

I would like to thank our partners, ILO, UNICEF, ICI Foundation, Save the Children, World Cocoa Foundation, Jacobs Foundation and many others, for the programmes and projects implemented to eradicate this phenomenon in our countries.

I hope that the work of our experts during these two days will contribute to providing specific solutions to the challenges that we still have to face in the fight against child labour in our countries.

I wish you all a very productive discussion. 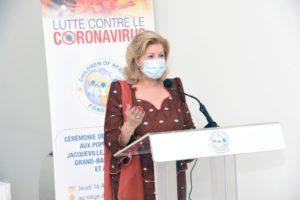 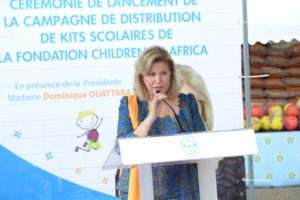 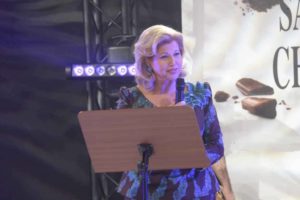 Côte d’Ivoire is doubly honoured at the 25th edition of the Paris Chocolate Fair. Indeed, First Lady Dominique Ouattara officially launched the inaugural evening of the event on Tuesday, October 19, 2019 at the Porte de Versailles Pavilion 4. This 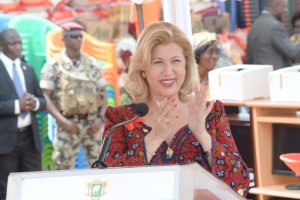 Speech by the First Lady visit to women living with hiv 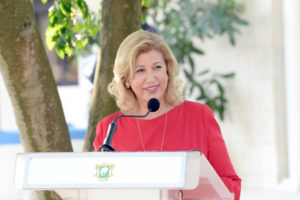 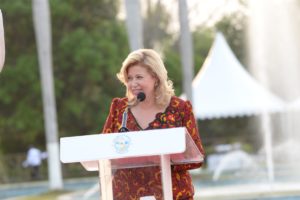